I was lucky to get to spend some time in London with the darktable crew. Being the wonderful nerds they are, they were constantly working on something while we were there. One of the things that Johannes was working on was the colour checker module for darktable.

This was originally published on the darktable blog, and is being republished here with permission. —Pat

unfortunately these are eat-it-or-die canned styles or icc lut profiles. you have to apply them and be happy or tweak them with other tools. but can we extract meaning from these presets? can we have understandable and tweakable styles like these?

in a first attempt, i used a non-linear optimiser to control the parameters of the modules in darktable’s processing pipeline and try to match the output of such styles. while this worked reasonably well for some of pat’s film luts, it failed completely on canon’s picture styles. it was very hard to reproduce generic colour-mapping styles in darktable without parametric blending.

that is, we require a generic colour to colour mapping function. this should be equally powerful as colour look up tables, but enable us to inspect it and change small aspects of it (for instance only the way blue tones are treated).

in git master, there is a new module to implement generic colour mappings: the colour checker lut module (lut: look up table). the following will be a description how it works internally, how you can use it, and what this is good for.

in short, it is a colour lut that remains understandable and editable. that is, it is not a black-box look up table, but you get to see what it actually does and change the bits that you don’t like about it.

the main use cases are precise control over source colour to target colour mapping, as well as matching in-camera styles that process raws to jpg in a certain way to achieve a particular look. an example of this are the fuji film emulation modes. to this end, we will fit a colour checker lut to achieve their colour rendition, as well as a tone curve to achieve the tonal contrast.

to create the colour lut, it is currently necessary to take a picture of an it8 target (well, technically we support any similar target, but didn’t try them yet so i won’t really comment on it). this gives us a raw picture with colour values for a few colour patches, as well as a in-camera jpg reference (in the raw thumbnail..), and measured reference values (what we know it should look like).

to map all the other colours (that fell in between the patches on the chart) to meaningful output colours, too, we will need to interpolate this measured mapping.

the following is a quick summary of what we implemented and much better described in JP’s siggraph course [0].

with some appropriate kernel \(\phi(r)\) (we’ll get to that later) and a set of coefficients \(c_i\) chosen to make the mapping \(f(x)\) behave like we want it at and in between the source colour positions \(s_i\). now to make sure the function actually passes through the target colours, i.e. \(f(s_i) = t_i\), we need to solve a linear system. because we want the function to take on a simple form for simple problems, we also add a polynomial part to it. this makes sure that black and white profiles turn out to be black and white and don’t oscillate around zero saturation colours wildly. the system is

many options will do the trick and solve the system here. we use singular value decomposition in our implementation. one advantage is that it is robust against singular matrices as input (accidentally map the same source colour to different target colours for instance).

we didn’t yet define the radial basis function kernel. it turns out so-called thin plate splines have very good behaviour in terms of low oscillation/low curvature of the resulting function. the associated kernel is

note that there is a similar functionality in gimp as a gegl colour mapping operation (which i believe is using a shepard-interpolation-like scheme).

we will feed this system with 288 patches of an it8 colour chart. that means, with the added four polynomial coefficients, we have a total of 292 source/target colour pairs to manage here. apart from performance issues when executing the interpolation, we didn’t want that to show up in the gui like this, so we were looking to reduce this number without introducing large error.

indeed this is possible, and literature provides a nice algorithm to do so, which is called orthogonal matching pursuit [1].

when you select the module in darkroom mode, it should look something like the image above (configurations with more than 24 patches are shown in a 7\(\times\)7 grid instead). by default, it will load the 24 patches of a colour checker classic and initialise the mapping to identity (no change to the image).

to interact with the colour mapping, you can change both source and target colours. the main use case is to change the target colours however, and start with an appropriate palette (see the presets menu, or download a style somewhere).

example 1: dodging and burning with the skin tones preset

to process the following image i took of pat in the overground, i started with the skin tones preset in the colour checker module (right click on nothing in the gui or click on the icon with the three horizontal lines in the header and select the preset).

then, i used the colour picker (little icon to the right of the patch# combo box) to select two skin tones: very bright highlights and dark shadow tones. the former i dragged the brightness down a bit, the latter i brightened up a bit via the lightness (L) slider. this is the result:

in this image, i started with the fuji classic chrome-like style (see below for a download link), to achieve the subdued look in the skin tones. then, i picked the iris colour and saturated this tone via the saturation slider.

as a side note, the flash didn’t fire in this image (iso 800) so i needed to stop it up by 2.5ev and the rest is all natural lighting..

use darktable-chart to create a style

as a starting point, i matched a colour checker lut interpolation function to the in-camera processing of fuji cameras. these have the names of old film and generally do a good job at creating pleasant colours. this was done using the darktable-chart utility, by matching raw colours to the jpg output (both in Lab space in the darktable pipeline).

here is the link to the fuji styles, and how to use them. i should be doing pat’s film emulation presets with this, too, and maybe styles from other cameras (canon picture styles?). darktable-chart will output a dtstyle file, with the mapping split into tone curve and colour checker module. this allows us to tweak the contrast (tone curve) in isolation from the colours (lut module).

these styles were created with the X100T model, and reportedly they work so/so with different camera models. the idea is to create a Lab-space mapping which is well configured for all cameras. but apparently there may be sufficient differences between the output of different cameras after applying their colour matrices (after all these matrices are just an approximation of the real camera to XYZ mapping).

so if you’re really after maximum precision, you may have to create the styles yourself for your camera model. here’s how:

note that this is essentially similar to pascal’s colormatch script, but will result in an editable style for darktable instead of a fixed icc lut.

this is to make sure we can process high-dynamic range images and not destroy the bright spots with the lut. this is needed since the it8 does not deliver any information out of the reflective gamut and for very bright input. to fix wide gamut input, it may be needed to enable gamut clipping in the input colour profile module when applying the resulting style to an image with highly saturated colours. darktable-chart does that automatically in the style it writes.

when processing the list of colour pairs into a set of coefficients for the thin plate spline, the program will output the approximation error, indicated by average and maximum CIE 76 \(\Delta\)E for the input patches (the it8 in the examples here). of course we don’t know anything about colours which aren’t represented in the patch. the hope would be that the sampling is dense enough for all intents and purposes (but nothing is holding us back from using a target with even more patches).

for the fuji styles, these errors are typically in the range of mean \(\Delta E\approx 2\) and max \(\Delta E \approx 10\) for 24 patches and a bit less for 49. unfortunately the error does not decrease very fast in the number of patches (and will of course drop to zero when using all the patches of the input chart).

it is possible to match the reference values of the it8 instead of a reference jpg output, to calibrate the camera more precisely than the colour matrix would.

another next step we would like to take with this is to match real film footage (porta etc). both reference and film matching will require some global exposure calibration though. 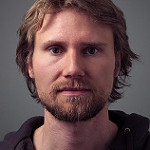 Johannes Hanika
He's just this guy, you know?
Worked on darktable a while ago, now pretends to work on it.
←PREVIOUSLY
Sharing is Caring
NEXT UP→
Texas Linux Fest 2016